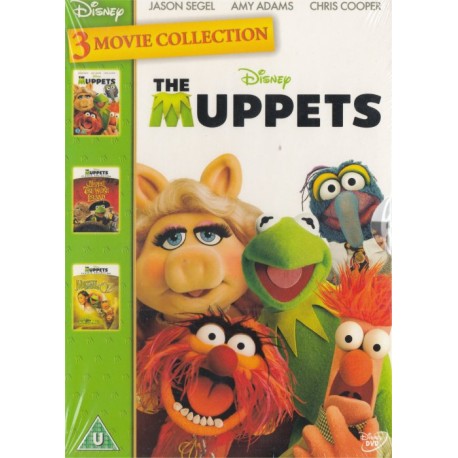 Region 2 is the standard region for the UK, Europe, South Africa and Japan; anywhere else DO NOT ORDER unless you have a multi region DVD player. Region 0 (AKA All Regions or Region Free) works worldwide.

In 'The Muppets' (2011), tycoon Tex Richman (Chris Cooper) plans to uproot the Muppet Theater to drill for oil prompting Walter (voice of Peter Linz) to team up with his brother, Gary (Jason Segel), and Gary's girlfriend, Mary (Amy Adams), to raise the ten million dollars required to save the vaudeville house. To get the money they hope to hold the Greatest Muppet Telethon Ever but they must help Kermit the Frog (voice of Steve Whitmire), who is now living alone in Hollywood, to bring all the Muppets back together for the first time since they parted company years previously. The film received an Academy Award for Best Original Song for 'Man Or Muppet'.

In 'Muppet Treasure Island' (1996), based on Robert Louis Stevenson's classic tale, the Muppets take to the high seas. Jim Hawkins (Kevin Bishop) and his friends, Gonzo (voice of Dave Goelz) and Rizzo (voice of Whitmire), head out in search of hidden treasure after they are given a map of a secret island by dying seaman Billy Bones (Billy Connolly). The trio hire a ship captained by Abraham Smollett (Kermit the Frog - voice of Whitmire) but it soon becomes apparent there are mutinous pirates on board, led by one-legged cook Long John Silver (Tim Curry).

In 'The Muppets' Wizard of Oz' (2005), a contemporary version of the classic novel by L. Frank Baum, Dorothy Gale (Ashanti) is a teenager with dreams of showbiz that seem far from coming true in the Kansas trailer park where she lives. When she's transported to the magical land of Oz, she and her sidekick, Toto (Pepe the King Prawn - voice of Bill Barretta), join forces with the Scarecrow (Kermit the Frog - voice of Whitmire), the Tin Thing (Gonzo - voice of Goelz) and the Lion (Fozzie Bear - voice of Erik Jacobson) to fight the Wicked Witch of the West (Miss Piggy - voice of Jacobson) and find the wizard who might make her a star.