What is Region 2? What does Region B etc mean?

You may have seen something similar to all or part of this on the back of your DVDs/Blu-Rays:

When DVD was first manufactured the "industry" collectively agreed to restrict playback of certain titles in certain areas of the world, in order to stagger release globally or restrict viewing in certain countries due to copyright and/or legal restrictions. So for example Europe (and South Africa and Japan for reasons beyond our comprehension) is Region 2 and we are a UK/Italy based site so we sell mainly Region 2 DVDs. If you live in another Region you need a DVD with the reason specific to your area, for example if you're in the USA you want a Region 1 version (or Region 0 but we'll come to that later in this FAQ). These are the Regions shown geographically: 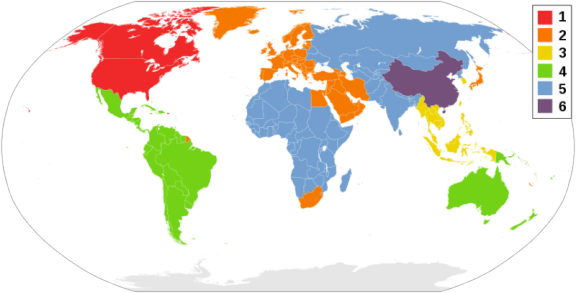 When Blu-Ray was released a "similar" approach was made but the world was divided into letters instead of numbers and there is only A, B or C (or a combo of some or all of them). So, for example A only works in North, Central and South America (see graphic below). You may see Blu-Rays in various "combos", such A & B or even A, B & C (ABC essentially means "works anywhere"). Graphic showing Regions below:

Some manufacturers will release DVDs as Region 0 (aka All Regions/Multi Region/Region Free), presumably to be able to sell to whoever they like, wherever they like. For example the former DVD/CD company Pegasus released at least 99% of its catalogue as Region 0, with one or two titles Region 2 (copyright reasons). A Region 0 works in any DVD player/DVD drive anywhere in the world. The Blu-Ray equivalent is usually displayed as A B C in a triangular shape (like the graphic near the top of this page).

So if I want a film you have but I am in a non Region 2 area I basically have to "go without"?

Not necessarily. Some countries, Australia for example, a large % of all DVD players are actually Multi Region so they can essentially play any Region. Sometimes a DVD player can be "made" Multi Region (usually by entering a code via the remote control which can be "reversed"). Check your manual, check online etc.

What is Royal Mail Mailmark?

In recent years Royal Mail started to upgrade the UK postage franking system and replace it with Mailmark. It is essentially similar to franking (except it's blue instead of red for some reason) but also prints a QR Barcode on each package, this is scanned by the postal service at various stages of the package's route to the customer, including delivery point. This is why we reserve the right to file all reports of non receipt with UK/Italy Police when we have scanned "proof" of delivery.

Do you accept any forms of payment other than Paypal?

At present NO. This is something we will continue to assess as the site progresses.

Why can't I find Title ABC on the site?

We specialise mainly in back catalogue titles at knock down pricing, we ONLY list what is in stock. Newer titles, eg the "latest release" is not our target market.